Picture Frame Decking: What Is It & Why You Would Want It 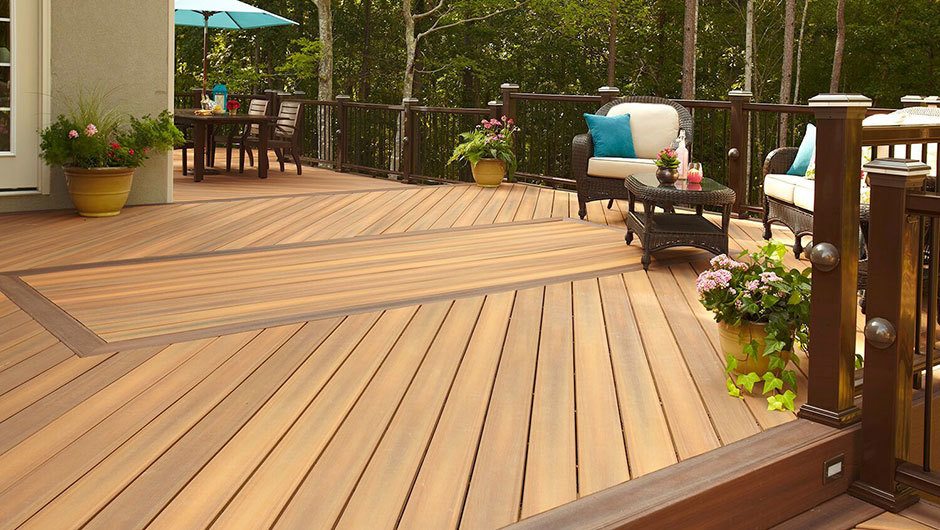 26 Sep Picture Frame Decking: What Is It & Why You Would Want It

What is picture framing on a deck?

Many decks that you see might just abruptly end, meaning the ends wooden planks are exposed to anyone who may be eye-level with the floor of the deck. While this may seem like a minor aesthetic issue, over time the exposed end-grains can look pretty rough and may crack or split. Picture framed decking is the solution to this problem, which is more than just the aesthetic aspect – it’s a safety issue, too! Deck picture framing is the term used to describe installing a border around the outside edges of your deck, which adds visual interest as well as clearly defines the deck edges and calls attention to any stairs.

Picture framing can be anywhere from simple to elaborate. A simple picture framing job usually consists of a single trim board running along the edge of the deck. It serves its purpose but doesn’t do a whole lot for visual appeal. More elaborate frames consist of more than one trim board to make a wider picture frame and can get even more interesting by using stain in a contrasting color to make the border pop. The wider the border, the more visually appealing it becomes, but it’s important that the width of the picture frame is in proportion with the size of your deck.

Why include picturing framing in your deck?

When considering a picture framed deck, a fair amount of pre-planning needs to go into it. Since deck boards can’t run parallel to their supporting framing, the end of every piece of decking must be supported. If your picture frame boards run parallel to the joists, they will require blocking between the joists at the edges of the deck for support. This is why picture framing is not a weekend DIY job! It takes planning by a professional to design the picture framing so that it all comes together with the deck in a way that is aesthetically pleasing and, most importantly, safe.

If you want your deck to stand out from your neighbors’ decks, then picture framing is the way to go. Anyone in your family who doesn’t have great vision would benefit from a border that clearly outlines where the deck ends or stairs begin, then picture framing is your answer. It gives your deck a visually appealing look, which may help with your home’s resale value, and also increases safety by drawing attention the edges of your deck. If all of this sounds good to you, contact Ridgeline Decks. We’ll listen to your wants and needs and design the perfect deck that will satisfy your desires and budget. Look no further, we are the deck builder for you!

Look no further, we are the deck builder for you.

Have a project in Eastern Washington or North Idaho? No problem! We service greater Spokane, Coeur d'Alene, Post Falls, and the surrounding areas. Get a free quote today!